Upgraded To New Gfx Card, Now All The Track Textures Are Stretched/blurry In Openglv2


22 replies to this topic 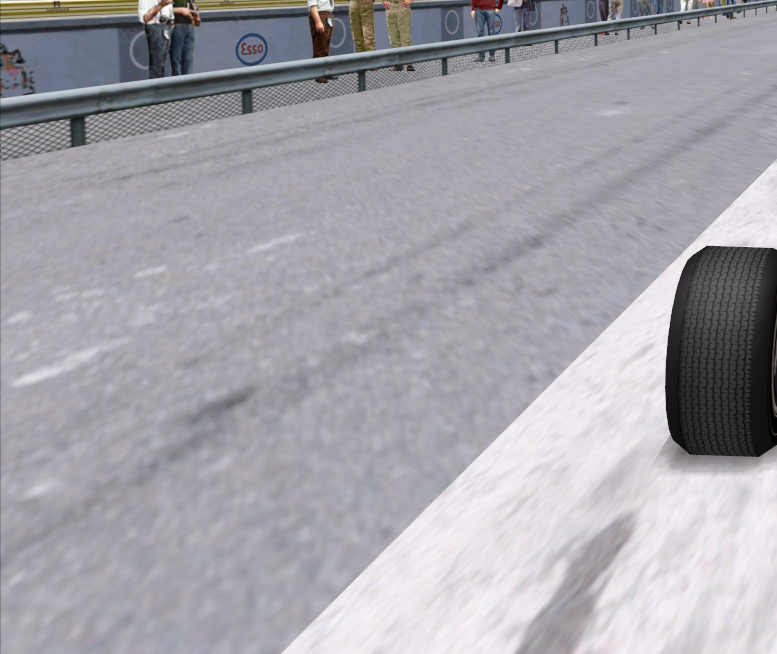 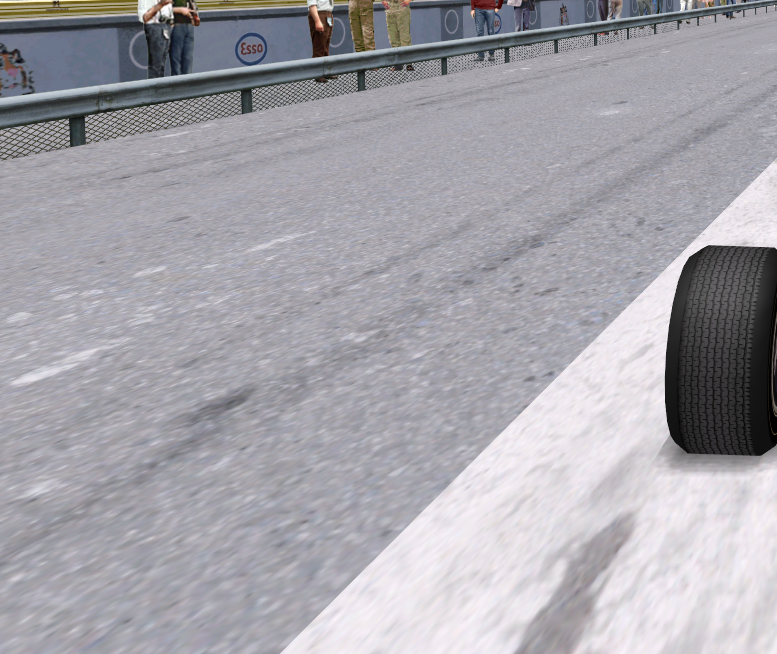 After testing lots of variables, I have found that this only happens when I use antialiasing. Incidentally, Multisampling is the only kind of antialiasing that does anything at all to the game - the "GPL easy installation guide" antialias settings do literally nothing in my game. I used 8x Multisampling and 2x transparency Supersampling here.

Using Dynamic Super Resolution @4k fixes the blur and acts as antialiasing, but then I don't get any kind of usable performance in the replay view, even with default 67s.

Anyone know of a fix that doesn't tank performance? I can't downgrade my drivers to old ones because the card I upgraded to (GTX 1660 Super) was only launched in 2019.

Sorry if the image formatting is a bit iffy.

And the GPU is which card?

How do the textures look with max AA and AA Transparency OFF ?

... the "GPL easy installation guide" antialias settings do literally nothing in my game. I used 8x Multisampling and 2x transparency Supersampling here.
...

Did you try my high-resolution graphics settings?
http://www.gplworld....tallation-guide 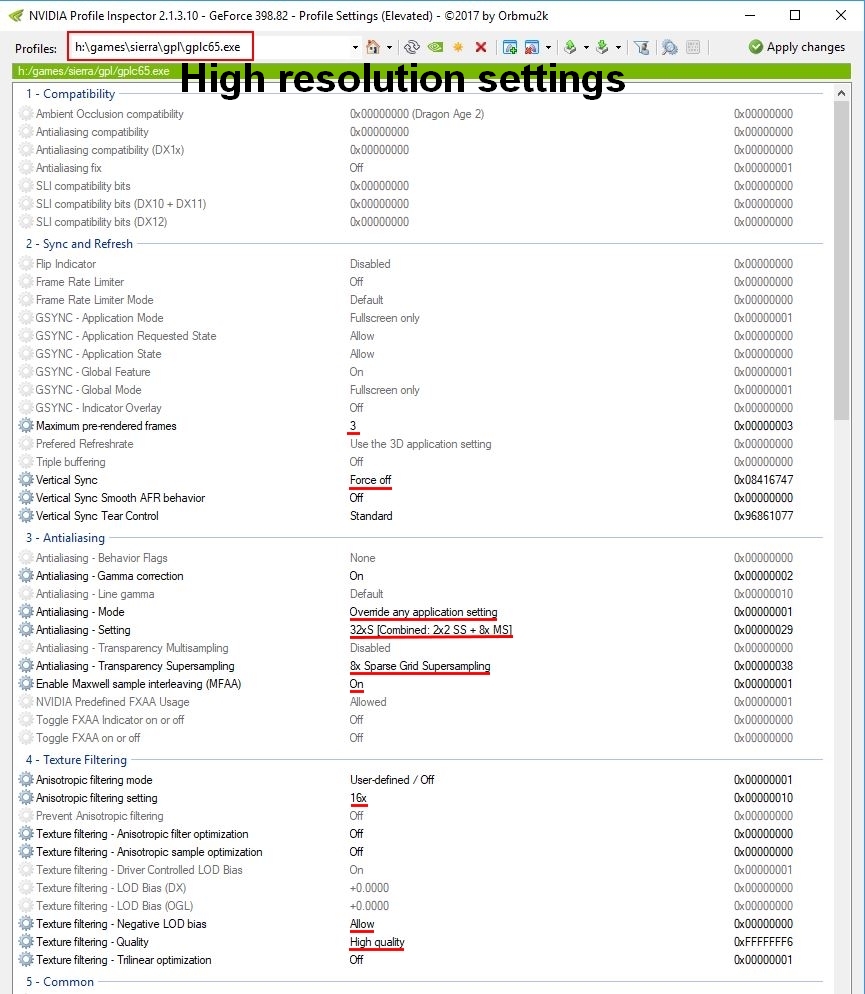 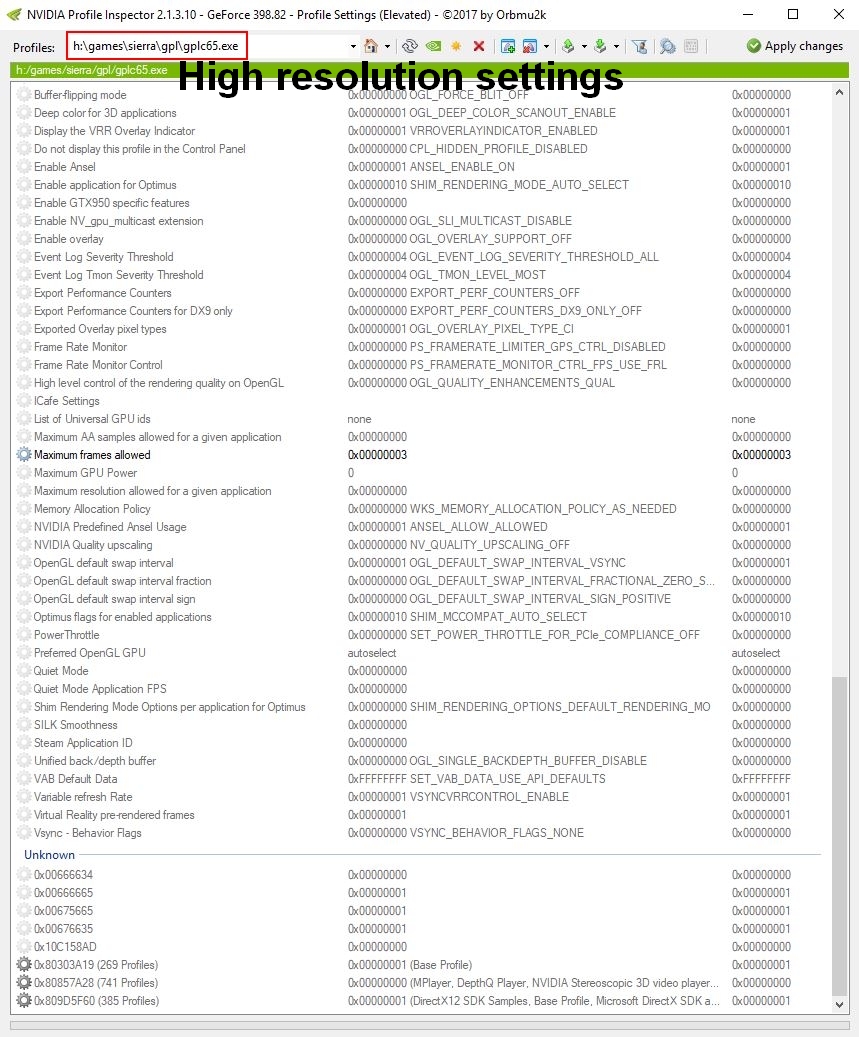 Look like 'Anisotropic Filtering', or the lack of it to be more precise. Try to force it trough the drivers (x16, quality instead of peformance when you can choose between them). The same way you're forcing AA now.

For a sharp image without alaising, your native resolution with 4 x super sampling should be more than enough.

Did you try my high-resolution graphics settings?
http://www.gplworld....tallation-guide

Yep. Using them, the game then has zero antialiasing of any kind applied to it. Only multisampling AA or Dynamic Super Resolution actually does anything. I don't know why. This happened with my previous card too (GTX 660Ti).

How do the textures look with max AA and AA Transparency OFF ?

Good question. With 8x msaa (the maximum that does anything) and no transparency AA, the problem is still there (perhaps slightly less so, but definitely still there.).

Look like 'Anisotropic Filtering', or the lack of it to be more precise. Try to force it trough the drivers (x16, quality instead of peformance when you can choose between them). The same way you're forcing AA now.

For a sharp image without alaising, your native resolution with 4 x super sampling should be more than enough.

I suspected this, but no matter which way I enable 16x anisotropy, when antialias is on, it only affects distant textures (like far away shadows at monza), leaving the foreground as you see it here.
With antialiasing off, the anisotropic filtering works perfectly in the foreground and the distance too.
The 4x Supersampling option would be my first choice, but every supersampling option is labelled in all caps "[D3D ONLY]" in nvidia inspector.

I don't know if this is your exact problem but maybe this helps (copied from our ADC forum). I use an nVidia GTX980 card

The problem:
Is anyone else getting this effect?  I'm seeing double of the yellow centre line, but the edge lines and everything else seems normal.

I wonder if it's my track or possibly a graphics setting.

The solution:
Figured it out.

With OpenGL, blurry textures can also be caused by the LOD (Level Of Detail) Bias settings. If you have a positive LOD Bias, such as +50, the renderer will be pushed to use smaller, more pixellated texture mips, and these will then be made to look blurry by any anti-aliasing you're using and your filtering settings. If you have a zero LOD Bias, textures should appear "normal". If you have a negative LOD Bias, such as -50, and the LOD Bias is not 'clamped' to zero in your card settings, then textures will usually appear sharper. However, the sharpening effect in the renderer can sometimes introduce a 'sparkling' effect when you're driving and the scenery textures are moving around.

I run GPL at 1920x1080 on a 24" screen using a GTX1050Ti, and at that resolution the pixels are small enough that I don't need and special LOD Bias setting. My preferences are:

I don't know if this is your exact problem but maybe this helps (copied from our ADC forum). I use an nVidia GTX980 card

I tried this just now. If I use "sparse grid" supersampling for transparencies (I have no option to use it for the normal type), then the blur goes away.
However, it only goes away because the Sparse Grid SSAA simply does nothing at all. All transparent textures/areas edges are extremely jaggy.

I think we know what's causing the problem now - transparency supersampling. Thanks for your help. I don't see that I could replace it with anything though, as the sparse grid option does nothing, as does the transparency multisampling

Ideally, I'd use Supersampling only, but that's D3D only. Dynamic Super Resolution should be the answer to that, but then the replay performance tanks.

If I switch to transparency supersampling, the track blur seems to increase with each type of supersampling (i.e. 8x = worst blur, 1x = not as much), but the armco and wheel etc. are very nicely smooth. The track effect is remarkably similar to using "toss biggest mips" - in fact I can see a low detail "seam" between two grass areas near the banking at monza67 that isn't there at all without the transparency SSAA enabled.

In inspector I have "allow" for the negative LOD bias option, and I use between -25 and -50 in the Gem+ options.
If I put it at 0 or above, my dashboards go weird and shimmery as if they are made of many independent vertical lines (weird to explain).

Thanks. Yep, it's definitely the same thing (although I must say solitude really went all out!)

I really like watching replays, so I guess shimmery wheel and billboards it is. It would be nicer if literally any of the antialiasing methods other than multisampling did anything, but hey.

Much of the sparkling, shimmering, and flashing is caused by mip files.  I do not recall the particulars of what I did, hopefully someone else can elaborate on this, but after new vid drivers...

At one track I had billboards flashing horribly, quite distracting.  On recommendation I extracted the pertinent mips, saved the main image as bmp and used that to create new mips using specific parameters, dropped the new mips back into the track folder, and no more flashing.  (But this was several years ago, I can't even remember my current phone number ....though I know the number from forty years ago, lol.)

I also experienced sparkly asphalt.  Spent a couple of evenings cursing at this;  could eliminate the sparkling but the rest of the image suffered.  Then noticed it wasn't at all tracks;  so extracted the asphalt mip from a non-sparkling track and dropped into a sparkling track, and no more sparkles.  Comparing the two images side by side in a graphics editor divulged no differences (fwiw, the reverse also worked - sparkling asphalt in a non-sparkling track and it now sparkled).

Much of the sparkling, shimmering, and flashing is caused by mip files.  I do not recall the particulars of what I did, hopefully someone else can elaborate on this, but after new vid drivers...
.........

This is exactly the right way to fix 99% of sparkly or flashing texture problems. A more detailed version of the procedure goes like this:

[1] Go to the track folder and find the .DAT file for the track. Open it up in the Datman tool so you can see all the MIP images in the file. Pick the sparkly texture (asphalt, billboard, whatever), and extract it to a separate work directory as an individual MIP file.

[2] Use the Winmip2 tool to open up the MIP file. Check the number of 'sub-images' in the file. For sparkly textures, you'll usually find that the number of sub-images is quite low, maybe 2 or 3.

[3] Use the drop-down selector to increase the number of sub-images to somewhere around 6 or 8. Re-save the MIP file.

[4] Copy the edited MIP file back to the track directory, and try driving around the track. You'll usually find that the sparkles have gone, or are much reduced.

slightly different issue  and NOT a major deal - but i'm stumped.
my vid card (nvidea GTxGeForce 1050i)    .. had settings that allowed a transition from desktop to application - w/out modifying the display in steps.

by that i mean, desktop is 1920x1080 and when i used to open one of my games, the desktop would be replaced w/out much notice by the game splash.

but i recently clicked on 'restore' of the 3d settings of the card (why? because i THOUGHT they were default)
apparently not and now when i launch a game i see the desktop change to the settings of the game (icons get larger for example)

is there ONE setting that controls this?

When you exit the game does the desktop revert to its normal settings?  Several older games that i run in a different resolution than the desktop will cause this briefly when I exit but before windows has refreshed;  once had a game CTD and left the desktop at the wrong resolution, had to restart windows to clear it.

Did you try a system restore?

Thanks Saiph.  It's quite possible you told me that a decade or more ago, either here or on RSC;  my memory isn't completely addled ...yet.  FWIW, that worked on every track I tried it on, some better than others but always an improvement.

When you exit the game does the desktop revert to its normal settings?

Did you try a system restore?
when i exit GPL, yes it reverts to normal desktop settings.  It never did this before i messed with settings

i did an nvidea settings RESTORE -   but not a sys restore (how?)

A system restore reverts your entire system to the state of when that restore point was created;  if it is recent but before you made those changes, it will undo those changes;  if it is too old, it will undo all changes made since that time.  But Win10 automatically creates a new restore point so if reverting doesn't help you can return to the current state.  Assuming you are on Win10 - https://www.tenforum...ndows-10-a.html

thanks... for me, scary - in addition to JUST having updated my nvidea driver.
sure, i could do it again - but even that small project left me shaking w/ worry.
for now, GPL is as it was - its just the switch from desktop (1900x1000) to GPL and then out that is 'irritating'... i can live with that - at least easier than a restore of w10