66 replies to this topic

That's the best ortho aerial of the old Glen I've seen so far. I only had the grainy 60s vintage in my collection. To you still have the set/filename from the USGS site?

thanks, your WG pic is excellent

BTW it is worth limiting the dates you are searching for, other wise it won't let you see the oldest imagery over 100 results. I thought it was blocking me based on location because i could view certain data but now I think it was because of that. For example i couldn't view the older laguna seca data than 72 or older than 1970 riverside but i could see they had older data than this before i logged in.


In regards to your question for Watkins Glen, the 1957 ones, 2 that I can see it on are under aerial photos, single frames: The circuit is clearly still under construction and the pitlane entrance and pits have not been built yet
The 1960 photo is useful for seeing the pitlane but is terrible quality.

I am surprised they do not appear to have any other data between then and 92. Although it might be in other sections or just not scanned. Probably more exists somewhere.

Still, it's enough to show that the final left is barely a turn at all and more an approach to the 90, which actually looks slightly sharper than 90 degrees, although it could be a distortion of the aerial photo.

In terms of elevation data and cambers, I am not familiar with what parts will give you that information or all the GIS terminology but the other sections might have useful stuff

So i finally bothered to make an account on that US site.

one2fwee, can you post the 60 pic also please?
Even if bad quality, it might be useful for both pits position and to check the angles of the turns

Okay, i downloaded them again.
They are basically the same but I will post both as the show the pitlane maybe more clearly that way.

According to this, turn 4 was altered in 68, the straight after straighted and t5 slightly too. However from these aerials i can't notice a difference really, although they are not the best quality, especially the 1960 one.
Was it altered or is that site just wrong (it is in a lot of places)?

The final left is barely a corner in the 60s version, I got a couple of aerial shots and it's pretty much a gentle bend to the left. Continue straight and you are into the pits.

That final corner survived quite long after the rebuild inside the modern pitout.

Ginetto, it is probably worth you making an account too for surrounding areas etc - i don't know how much you need uncropped. Also maybe it gives you access to elevation data.

Nürburgring 1976 (or 75, can't remember) - not the best quality because it's from US spy satellites, but until i know a way of getting local german aerials from a german site, unfortunately all i have:

Too late to be that useful for nordschleife but it shows südschleife quite well. Scharfer kopf seems to go where i expected, across the area that is today grass , hugging the trees. Same for bränkekopf. Surprisingly, the place where i thought the turns come out before bränkekopf is different that i expected from the earliest google maps aerial (i think 1999). It seems to come out slightly further south than the carpark exit. Could just be the aerial distorion though.

Awesome, thanks for showing these pictures!

Possibly this road could be the 1962 layout mapped (if so then slightly incorrectly) here? 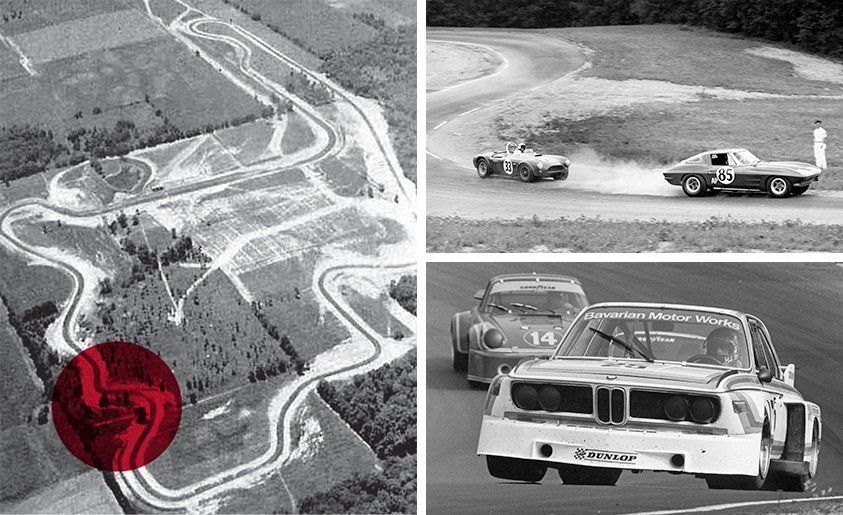 one2fwee
Big thanks for all this pictures!

According to this, turn 4 was altered in 68, the straight after straighted and t5 slightly too. However from these aerials i can't notice a difference really, although they are not the best quality, especially the 1960 one.
Was it altered or is that site just wrong (it is in a lot of places)?
I'm sure there is error on tis site. T4 (now T6) was altered in 1988 with massive reconstruction of whole track.  To extend run-off area there corner was reconfigured and baecame tighter.

Yes, the whole track was altered in 88, including that part. Just that that site seems to show also for 68 too. Only the person who made the maps could know.

I found a clearer picture of the original turn at mid ohio, pic from 1980:
https://i.imgur.com/bIaT4Wz.jpg

1972 (shows some optional roads around the back of the pits a bit clearer). In fact not all look built in 70, but it's hard to see.
https://i.imgur.com/L8hCcK2.jpg

1967:
https://i.imgur.com/FQMWJdU.jpg
Notice how the strange bit where the road kind of cuts out just before the ranch entrance is there in 67 too. Unless it was all just a gravel road there? Or it has been altered by 67 too? Still, it shows less trees etc than today.

In both cases you can still sort of see some remnants of turns of the final layout.

However, other places have photos from operation:

So it just shows there is a lot of data out there, just hidden away. Most of it is probably not even publicly available, online or whatever. There will definitely be better old glen 60s aerial photos for example, just not on that site.

Changed everything to links cos it was getting a bit heavy. To view full size, remember once you get to imgur, right click on the images and press view image, otherwise it will still scale them only to your browser window size. If you're on a phone you might need to request the desktop version of the site first. Yes, imgur is annoying.

According to this, turn 4 was altered in 68, the straight after straighted and t5 slightly too. However from these aerials i can't notice a difference really, although they are not the best quality, especially the 1960 one.
Was it altered or is that site just wrong (it is in a lot of places)?

one2fwee
Big thanks for all this pictures!

I'm sure there is error on tis site. T4 (now T6) was altered in 1988 with massive reconstruction of whole track.  To extend run-off area there corner was reconfigured and baecame tighter.

I've found racingcircuits.info not being the most accurate when it comes to historical trackmaps. To be fair finding good imagery past the mid 90s is tricky.

Here for example is what is now LAX back in 1940 when all there was was Mines field and a racetrack next to it, taken from the above page.
sat.png

Where is this in geo-coordinates? LAX airport, LAX station? I assume the airport but i couldn't find 1940s images there. It's probably easiest to give geo coordinates tbh.

Btw anyone wanting to use the aerials in the topic for track making is best making an account and downloading themselves - quite a few of them have camera calibration PDFs that tell you how to correct (or maybe how the image has been corrected) for distortion etc Although i don't necessarily understand the nota\tion for this process :$

It's right in the middle of the current LAX airport. If you look at the the runway of the precursor airport are just south of the racetrack.

By 1940 the big track is gone, it only ran 32-36, 36-40 the small one SE was run. The whole place was a dirt track with little permanent infrastructure and what was there the army took down as WW2 came around. Here it is on a race day. 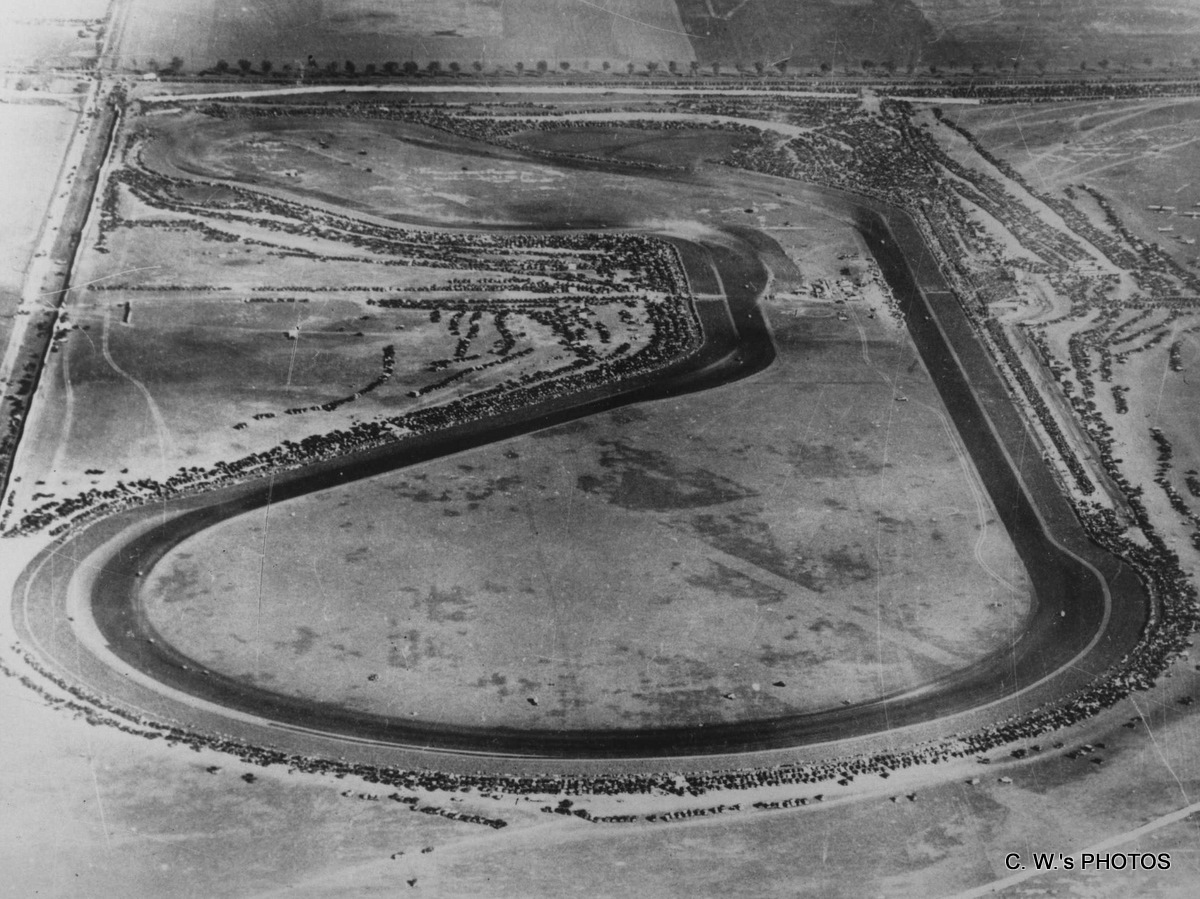