13 replies to this topic

Three 'new' progset releases, though you've already seen two of them. For a while there I thought I was going to see a full year between releases. (The previous release, for Zeltw71, was in January.) I'd almost found something else to do with my free time in the interim. 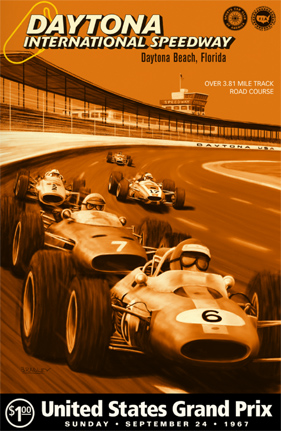 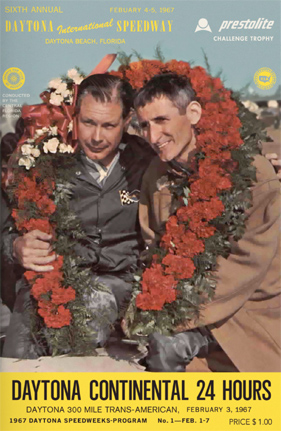 Daytona: The progset comes with the track, so a big whoop-de-do on that, as far as 'newness' is concerned. Comes with 2 covers. The second one is a cleaned-up/recreated version of the real-life cover. The other one is a bit of original paintwork. Did it in Painter - it's a chalk/charcoal thing done on a 50% gray background -- then the whole thing was brought over to Photoshop for colorization and text work. There's a MegaPoster available, if you're into that sort of thing. 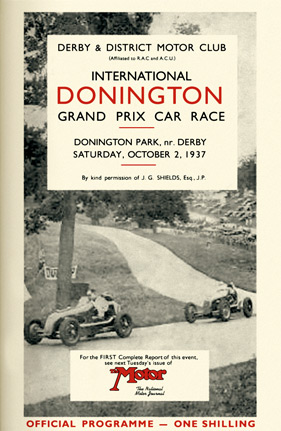 Donington 1937: A cleanup job of a real-life scan. And it comes with the track already, so you know, whatever. 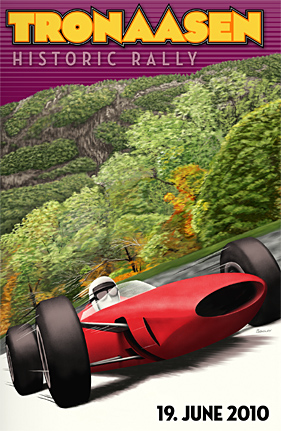 Tronaasen: Hey look, it's the new thing! Another in the long line of obsessive/compulsive tree-drawing covers. Stupid trees. Why can't we have more GPL tracks set in featureless deserts?

Anyway - this one is sort of a mixed-media piece. Or would have been, if I didn't work entirely digital. The process was slightly complicated, and used every tool in my kit (all 3 of them). Started by putting together a quick photo composite using a screengrab from the track and some tree photos I have. Took it over to Illustrator and drew vector masks for the car, which I broght into Painter to use in with its airbrush.

The rest of the scene was drawn in Painter, using a couple of Gouache brushes. The 'TRONAASEN' text was done in Illustrator, to take advantage of its superior outlining abilities. (To wit: you can put a fat black stroke on something pointy, such as an 'A', and the black stroke will also have a point. Outlining strokes in Photoshop always get rounded off... for excellent reasons, but it's still cheesy-looking.)

And then the whole thing was brought to Photoshop for color tweaking, etc.

I'm thrilled with it -- it'll be going up on my wall shortly. There's a MegaPoster, naturally. Here's a link to the 3x one.

Great work as always John, thanks! I've just downloaded and installed the Tronaasen set and it looks really good, I had the Daytona ones installed with the track, and I'll get around to trying Donington soon too. Thanks again!

Yes, thanks for the great work John!

Great artwork, will add them to my collection.

And thx for the technical background infos.

Thank you, John, for your painting and also for your writing. This makes me missing the good ol' RSC.

I think I´ll take a closer look at Illustrator myself now that I´ve downloaded the 30 day trial version.

. This is an important part of the GPL interface

.
Have to put the mega-posters in picture frames to decorate conspicuous walls

BTW, you may well be wondering (with regards to the don37 cover): "'Cleanup of a real-life scan', eh? Not that clean, 'cause it still looks like :crap:."

And of course, you'd be right.

What you're not seeing is what I had to work with... but now, through the Power of the Internet, you can!

Before and after shots -- behold! (Isn't technology totally freakin' awesome?!?)

you're an amazing talent John~!

are those guys in the 37donnington NOT wearing head protection of any kind? 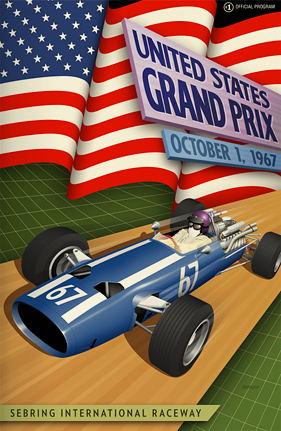 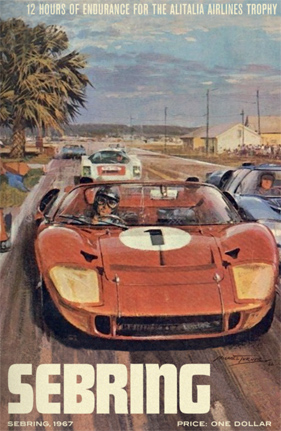 Sebr67 - The progset comes with the track, so you don't need to download it. As with Dayto24h there are two covers -- a modified real scan for the Sportscars (whenever you get 'em), and an original piece for everything else.

The original cover is sort of another take on the Art Deco 'thing' that I do so enjoy. Kinda. There are certainly deco elements to it: the abstract composition, the curvy grid (SCIENCE!), the heavy forced perspective. Fell into my normal trap of getting bogged-down in details (the engine, the driver suit, etc) which sort of gets outside the realm of 'attainable' using 1930s (or 1960s) technology, making the whole thing somewhat anachronistic.

Sh*t happens. What can I say, I like details.

It's worth noting that this piece was done entirely in Illustrator. Everything -- the soft highlights, the streaks, and the shading on the engine pipes, etc. --  is exactly as it came out of Illustrator. Because I wanted to see if I could. (And let me tell you, if you've ever used Illustrator, you know it doesn't do this sort of thing willingly. You've got to wrestle it to the ground, sit on its chest and dangle loogies over its face until it cries "uncle". I mean, how else will it ever learn?)

Personally, I can't wait until this track's younger sibling (with a slightly different layout) is released. The cover on that one is possibly my best thing ever. Certainly top-5. Something to look forward to.

I am honored to have your work completing my tracks!