16 replies to this topic

As discussed and announced in the thread "how to fight gplshift", FairShift is now ready and can be used. More information, some screenshots and of course the download is here: https://bitbucket.or...shift/wiki/Home

In short words: FairShift supports H wheels in GPL. Its a special tool developed to deliver normal shifting times. Till today GPLSHIFT surpassed these delay times under special circumstances. So its target group are drivers who are using H shifting without any clutch. Its up to everybody to use it or not. Drivers and league have now an additional option to avoid superfast shifting times like 0.111 milliseconds.

Special thx goes to all supporters and especially the testing team in no particular order:

after the release of fairshift version 1.0, i received a few replays from drivers using gplshift with clutch. It seems that the usage of clutch in gplshift cannot really be monitored in the GPLRA report (shifting times). They still showed very fast shifting times of 0.111. In reality they were a bit slower of course in order to engage the clutch but it cannot be monitored in a league. The reason is that the gpl clutch is a bit limited. Its on / off without any way of modulation. In GPLSHIFT you stick in a gear as long as you press the clutch pedal enough.

Still it was a motivation to improve fairshift (in development for version 2.0) to make it work with a clutch pedal. It will support multiple gaming devices for ppl who use a special pedal set thus one for steering (one device), second for pedal work. Clutch pedal can be assigned and monitored in fairshift to see which one it is. One question remains regarding a realistic approach:

In a normal road car you can modulate clutch and gas. GPL doesnt support that cause its clutch on / off (full). I was thinking about two activation points for the clutch. One activation point to allow a gear change but then you also have to release the clutch enough in order to accelerate again. So there are in fact two points monitored. What i heard from GPLSHIFT is that you can press the clutch pedal a whole way down and it doesnt show a single reaction till that one single activation point. Thats it. I would expect that if you press clutch pedal a little bit, then the rpm goes high without any acceleration. In order to make a gear change you have to press it fully down. Thats what fairshift is trying to simulate (with small buffer zones due to calibration issues and dirty potis) with two activation points.

Thats an approach and behavior you would expect from a road car. You are in gear with pedal to the metal (gas) and press clutch a bit and rpm goes crazy suddenly  but its not enough clutch to switch gears. But what about formula cars of that age? I dont have any data about the clutch behavior from those except some small data from modern formula one cars (they seem to have a very narrow area where clutch is working for the start). On top of that what do GPL drivers think of simulating these two activation points? In fairshift you can try pressing clutch a bit and then you are basically in neutral but not enough to change a gear. For a gear change you have to press it down enough but also release more.

We are also looking for some testers if there are ppl interested in. Only prerequisite is H shifter and a working clutch pedal

Screenshots from a version in development: 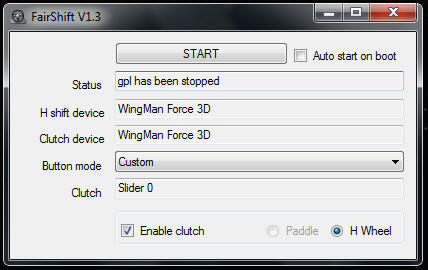 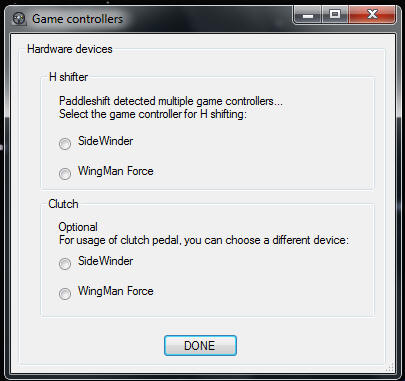 Unlike the main idea of fairshift, sounds your latest idea logical, interesting and more realistic for H-shifter user. Ideally having the possibility of a abrasive clutch, which means more than 2 "points".

GPLs clutch is not on/off. There is a little amount of slip in them if you find the right spot, thats how I get the 65ers for the line btw. Racing clutches dont have much slip in them as a slipping clutch creates heat which destroys the clutch in time. Not to speak of the power loss you get.

Version 2.0 is now online. Why a new version? The reason was simple: The usage of a clutch pedal couldnt be monitored in GPLRA. So s.o. driving with clutch does show shifting times of 0.111 though in reality he wasnt as fast as drivers without a clutch. To make it more easy in future to verify this issue, version 2.0 now does support a clutch pedal and on top of that we can monitor the shifting times like usual. Clutch works a bit different compared to standard GPL or GPLSHIFT. While pressing the pedal the gear lever will jump into neutral. Testing showed indeed a very narrow bandwidth where the clutch is slipping. We also came to the conclusion that its not important for online racing so we stayed with the current technical solution.

The usage of FairShift 2.0 will be mandatory for all H shifters in GPLRACER league in 2014. In case you are using an H shifter without clutch, you can stay with version 1.0.

Special thx goes to Gazza for doing a major part of testing this software.

Thanks very much for this great product!!!

Having trouble getting Fairshift...
The link to Fairshift takes me to a  'BitBucket.org" site, which you apppear to need an account on.  When I try to sign up for an account, it freezes Internet Explorer every time and crashes.  By chance, is there someplace else to get this download ?

I don't think you need to sign up.  On the left, the bottom icon is for the downloads.

Bob is right, I just dlded and installed it without registering

Guys,
Thanks for the replies.

Hate to appear dense, but I guess I'm missing the download button.

At the bottom is:

There is a link titled "Downloads (2)" on the left pane. I've highlighted it in the screenshot attached. The 2nd link in the first post should lead you to the site.

thanks for your patience on this....That screen shot is very informative and I can see why this must look so odd.
What is happening is that, on my computer, those links don't bring up the screen you are getting at all.  I've attached a screenshot of what I get.

I'll try again tonite on my computer at home using a different browser, since I can't think of anything else.

Again, thanks for the assist...

Finally success  !
When I got home I tried on my wife's Macintosh and it worked perfectly, bringing up the screen you showed immediately......
I have no explanation of why my Win 7 laptop was bringing up a different screen.

Again, thanks for all the help.

FairShift dies not work with the new CanAm66.
I'm using that great tool (GPLracer league).
I hope it's possible to get a new version which support that mod.

see this topic for Version 2.1 and the inclusion of more mods.