4 replies to this topic

For curiosity, I decided to install the 2020 demo and check it out. I downloaded the "manual install" .7z file, and decompressed it to "L:\GPL 2020 Demo\". My main GPL installation is on my "G:\" partition, but that is getting a little bit full so I decided to use a different drive.

I set up a shortcut for "gpl2020demo.exe" and started it up, and everything went nice and smoothly. I set up my controls, and did some laps with the Lotus 33 at Zandvoort using the default "DEMO2020__GPL" player.

I then decided that I wanted to try using the 60FPS patch, and that I wanted to set up GEM to do the patching for me. So I went to my current GEM installation ("G:\AllGPL\GPLSecrets\"), started it up, and clicked on the "Installs" button. I added the path "L:\GPL 2020 Demo\gpl.exe", and clicked on "OK". However, GEM then displayed a message saying "No players found in GPL install. Please start GPL manually and create a player before starting GEM+." GEM then shut itself down. I checked the demo installation, and made sure the "players" directory looked correct. I tried to add the installation to GEM again with the same result.

I then thought that maybe GEM was having some problem with the spaces in the path name for the demo installation. So I renamed the demo directory to "L:\GPL2020Demo\". I started the demo again using "gpl2020demo.exe" to make sure that the directory change had not messed up the demo, and everything worked ok. I then went into the "Player Info" screen in GPL and created a new player called "Keith20Dem Ballard". I quit GPL, and checked the "players" directory again, and GPL had correctly set up a new player directory called "Ballard__Keith20Dem".

I went back to GEM, and again tried to add the demo install, but again I got the "No players found..." message and GEM shut itself down.

So I've run out of options and I'm a bit confused. Can anyone tell me why GEM won't accept the 2020 Demo as a new installation? Does it have to be on the same drive perhaps? Thanks for any help given.

I found it is missing the GEM files needed to recognize the mod and be usable with GEM. I had to install the Legends of GPL mod on top of the demo to get it to be fully working in GEM.

The Demo is a stand alone pre-packaged item, aimed at getting people to try GPL.

The Demo does not have the \mods (.cst .eph etc) entries used to create the demo exe and gem.ini has not been populated.  Therefore GEM+ knows nothing about it.  A demo user could not re-patch/re-create the Demo executable.  So installing GEM+ for the demo itself is pointless and no further GEM+ options can be added asis.

You can add additional tracks and as GPLaps says full proper Mods (because the original demo gpl.exe is included).  His idea does work around the situation, effectively replacing the demo with the Legends mod.

The reasons behind this approach was an attempt to keep it as simple as possible for new people to pick up and try GPL.  From your (experienced GPL user) point of view there isn't really anything new in the demo.

If you have added the demo install into GEM+ then you can add a new player by running the gpl.exe in the demo folder and adding the player in there.  It's odd how GEM doesn't see the player you added but I got that same result when adding a player using the demoexe.

Thanks GPLaps and webfoot. I think I know where I went wrong, and you've mentioned it in your final paragraph webfoot. When I created the new player for GEM to use, I ran the GPL2020Demo.exe. I should have run the plain GPL.EXE instead. GPL.EXE creates the standard "player.ini" file in the player directory, and it's this file that GEM is looking for when you tell it about a new installation. The demo creates a "pl18LG.ini" file instead, so GEM doesn't spot it.

Anyway, I've had my little play for today, so I'll now tidy up my hard drive and go back to my original (rather larger!) GPL installation.

The demo is definitely a good way for newcomers to get a taste of the very varied selection of cars now available in GPL. Well done to everyone involved in creating it.


Let`s for example install the GPL F1 1955 mod to the GPL 2020 Demo.
1) Go to the C:\GPL 2020 Demo\ folder and run the gpl.exe and add a new player. Exit the demo again.
2) Install the GPL F1 1955 mod into the C:\GPL 2020 Demo\ folder.
3) Install GEM+ which is part of GPLSecrets: http://gem.autosimsport.net/
Important: Do not install GPLSecrets into your GPL 2020 Demo installation! You need GEM+ 2.5.32 or higher to run GPL mods! For GEM+ indexing needs to be activated (Windows default setting), because GEM+ needs to access the GPL 2020 Demo player profiles!
4) Start GEM+, click on the button Installs, then click on the button Add and set the path to the gpl.exe which is C:\GPL 2020 Demo\gpl.exe.
5) In GEM+ click on the button Carsets and set the inactive carset GPL55 to active by clicking on the button > in the middle of the menu.
6) In GEM+ choose your new player (here Player One). Then make sure that you are using the 1955 carset (GPL55, CARS55). Hit the green button to create and launch the gplc55.exe. In the GPL 2020 Demo you need to calibrate your controller/ wheel for the new 55 mod. At Options deactivate all driving aids, by unticking Automatic Shifting, Braking Help and Throttle Help. At Options also set your graphics resolution (for example 1920 x 1050) and Detail Bias to almost maximum to the right (+). Then run a 55 mod Training and use the Car Type Grand Prix, or run a 55 mod Single Race.
Note: You can also change your Driving Resolution and Graphic Options and other player related settings for each mod in your players folder in C:\GPL 2020 Demo\players\.
Tip: In GEM+ click on Configure button and tick Link Carset to Player, do not tick Confirm Changes on Exit. 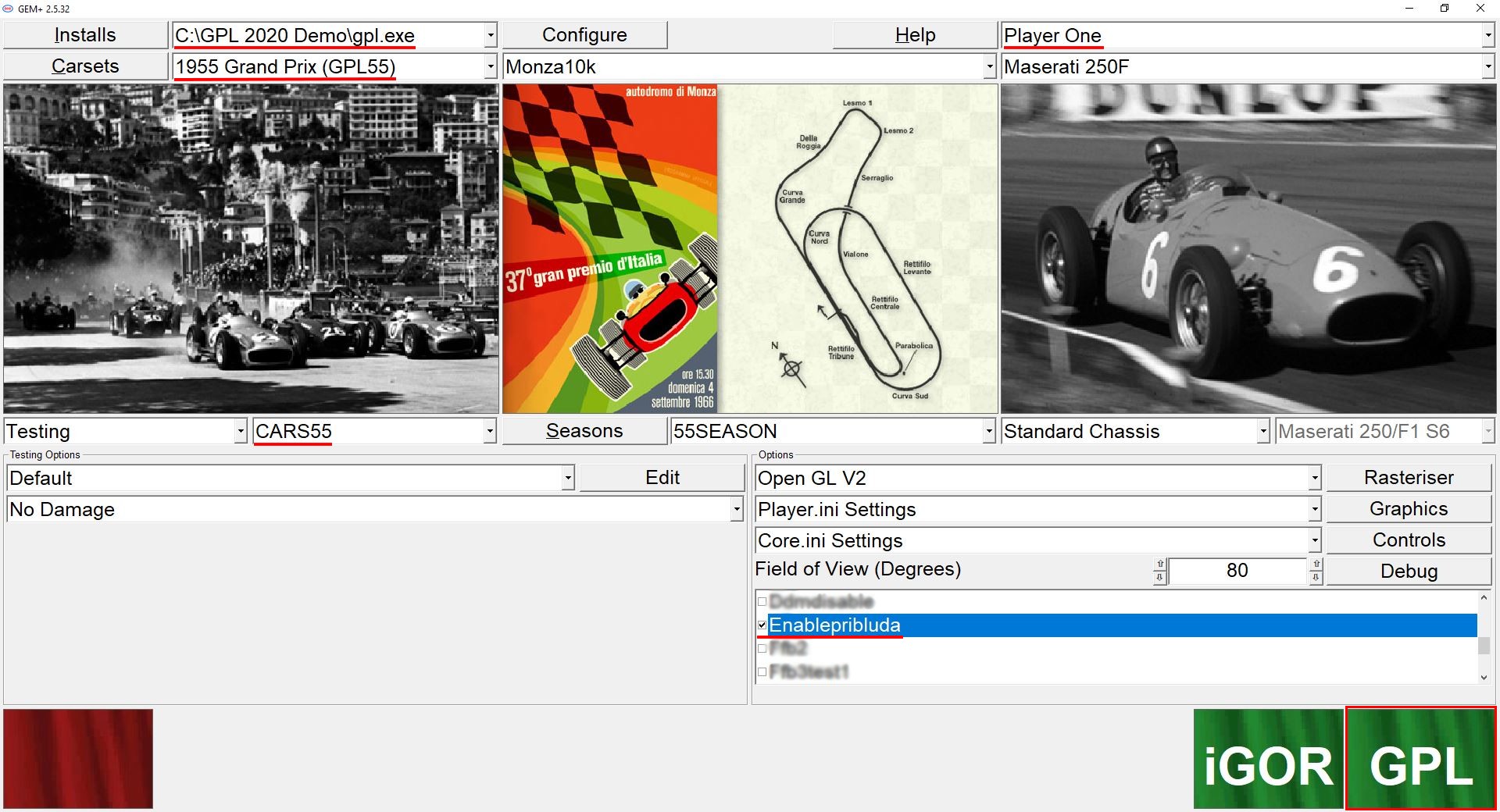