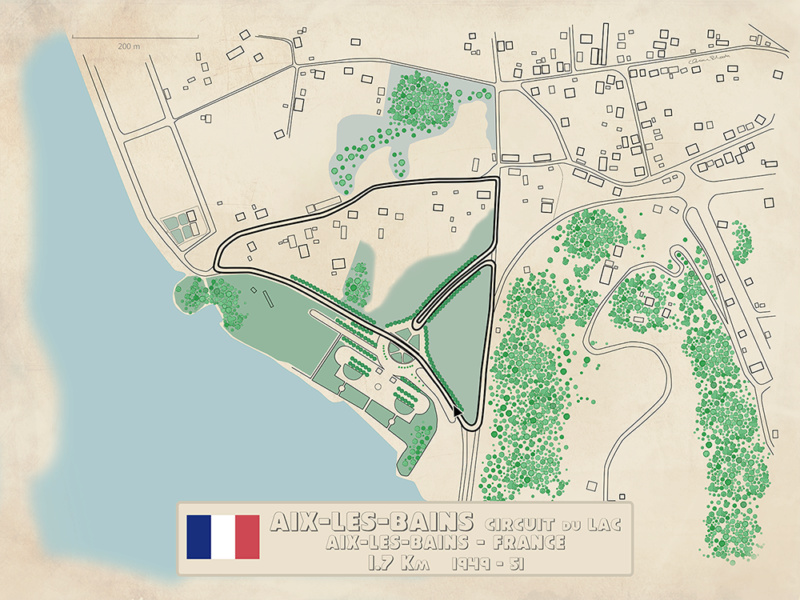 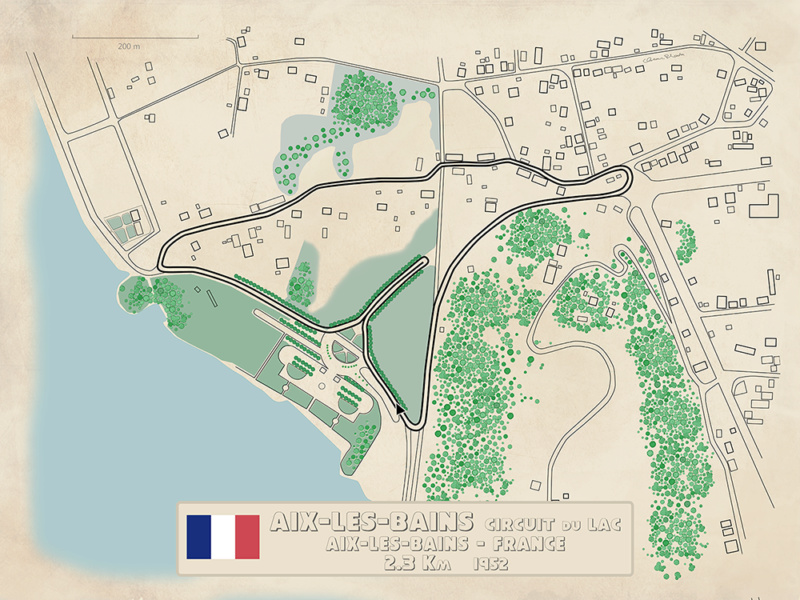 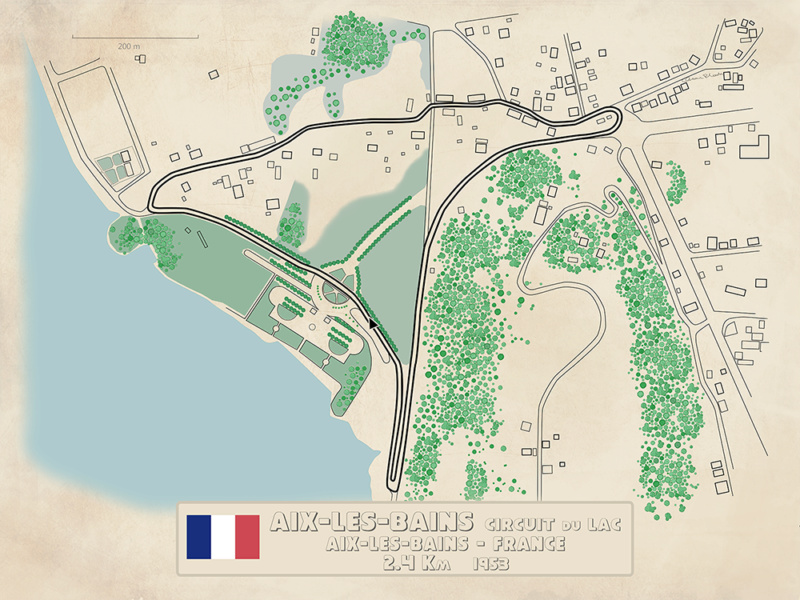 This latest one looks like a really-really fun track. Those trees and the park with Lac de Bourget in sight would give a great atmopshere 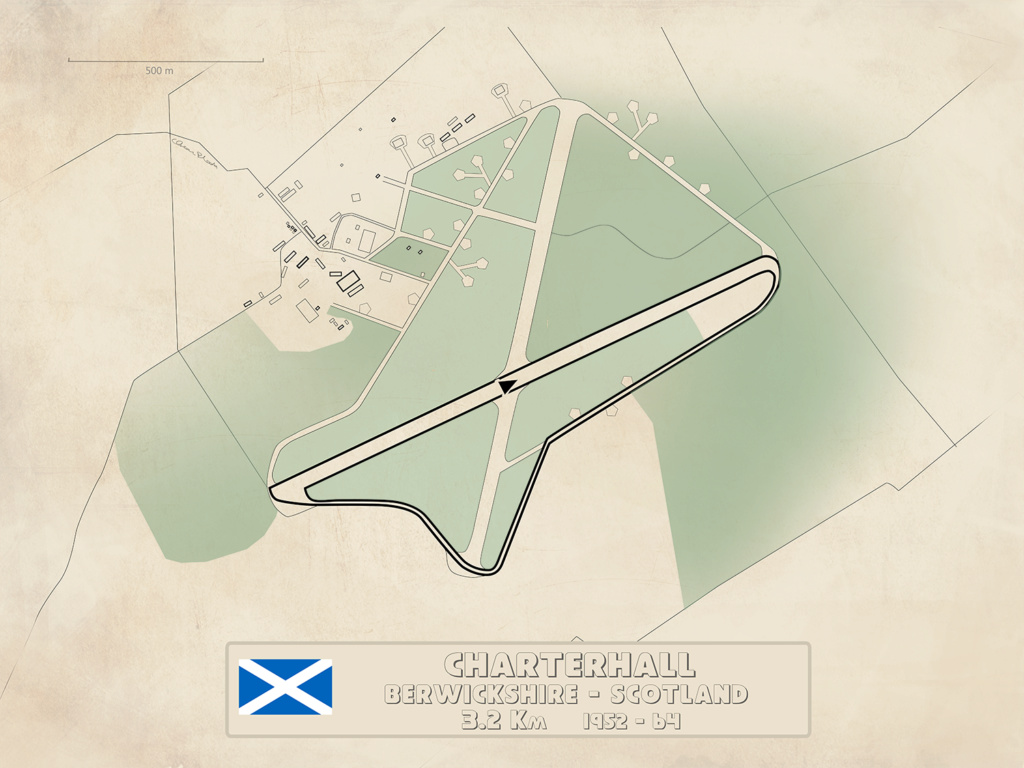 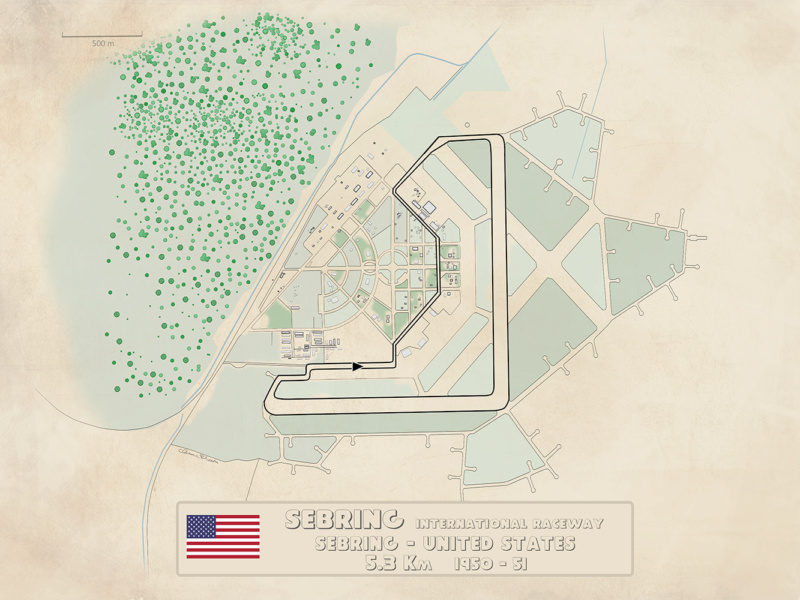 Wow!!  I never realized what a different layout the 1950-51 track was composed of.
Thank you for this one, Oscar. 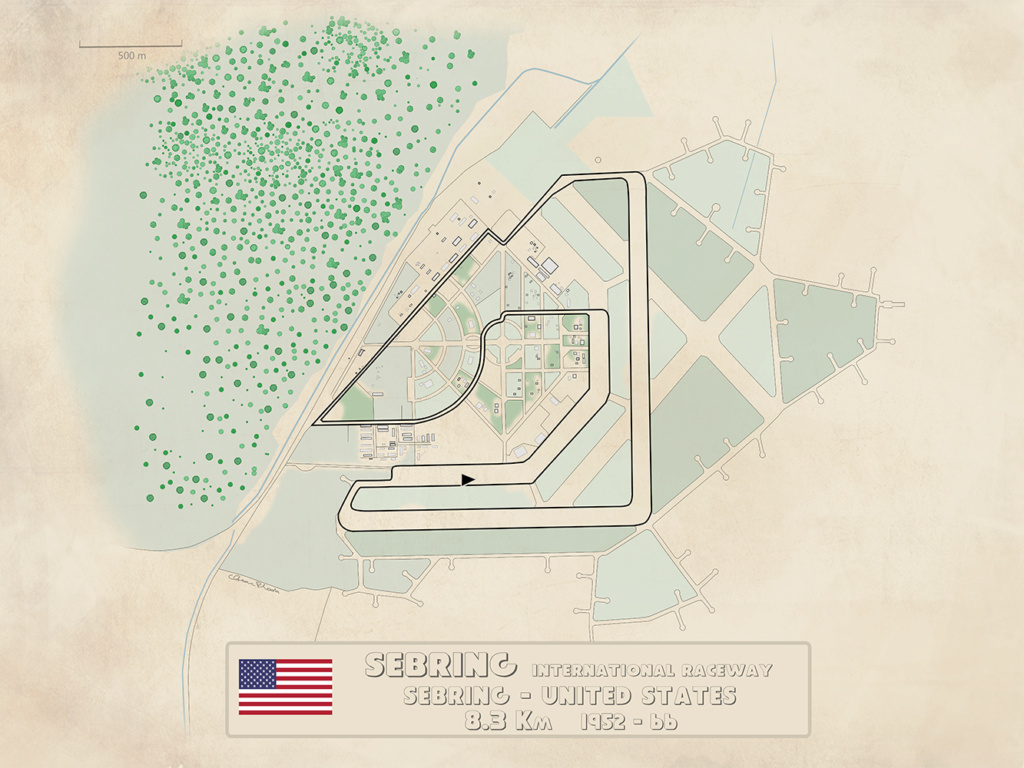 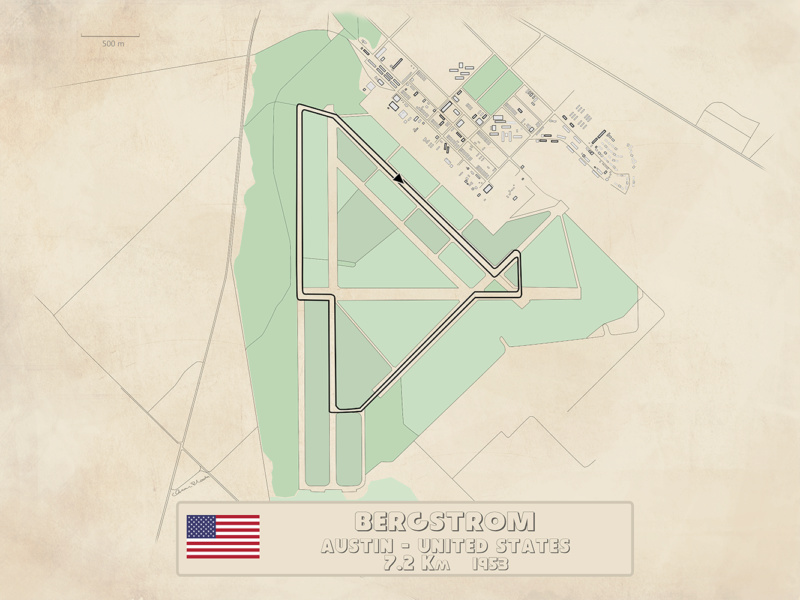 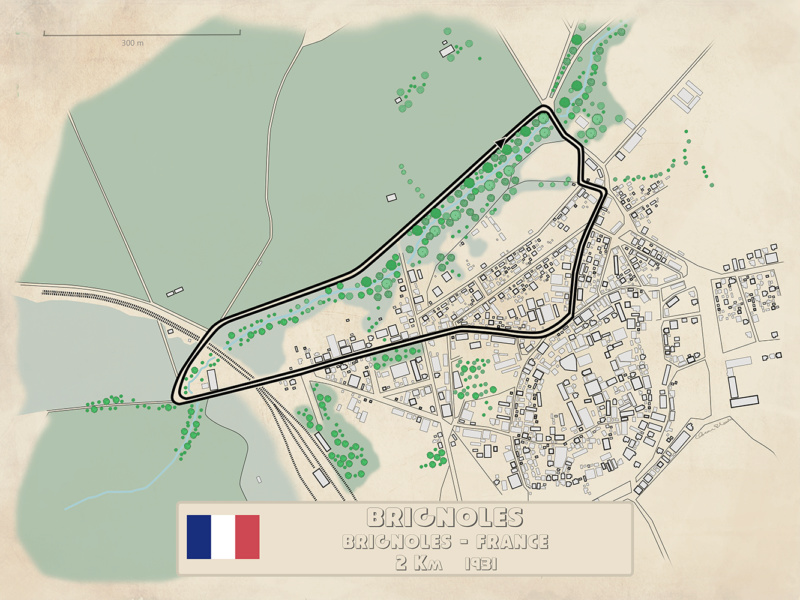 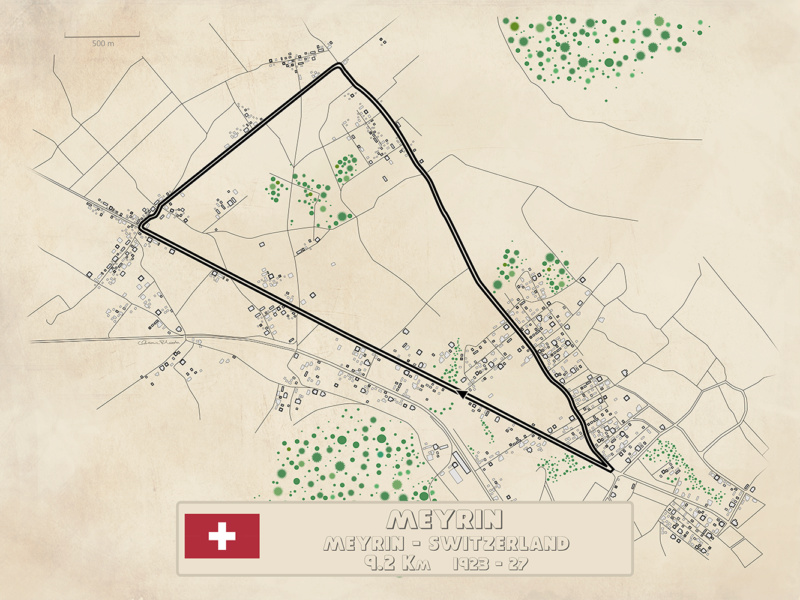 I knew that there were several races at Lausanne, but I didn't knew at Meyrin... How do you find this type of informations...?...

Once more a great bravo for your insatiable search... And everything you find !

back in the days races could have been presented under a variety of names sometimes, that can lead to confusion or assuming one thing that might not be correct

Meyrin was actually presented generally as the Geneva grand prix, there were a few races during the same meeting and sometimes each one might have a different name or the name that was passed on was different, is not rare when I do some research following one name, to finish with maybe 2 or 3 tracks close by or just different layouts or with different names for the same thing

I will say that in general magazines and in particular old magazines, will have sort of close to exact information, measurements are usually off but everything else seems fine, now if you do research with the web on some places that try to project a historical place or whatever, lots of them it seems that they just copy and never bother to check and keep passing on bad information, of course there are those who do the right thing but it is very easy to get confused


personally I like to take my time and start by trying to establish the identity, then start with the emails and contacts to get the information as close as possible to the dates and while waiting for those, start going through books and magazines, contact a few people that have a huge collection of programs and information that helps me sort out any little details

Meyrin now has an airport running across the back straight, the base map was from 1930 and got complemented with some pictures from the 50s, but by then the airport was already there, it seems like the airport was there back in the beginning also but not on the same scale or at least wasn't cutting the track, it looked more like a very tiny local airport and the runway wasn't really properly marked

what I usually do is get a calendar going to have some order, right now I sort of have a few, one for pre war, one for SCCA, f1-f2 and some other for perhaps Australia races, then from all of them get some sort of calendar that I can follow

the next step is  start contacting local authorities for maps, aerial photography, parks and public works usually might have a digitize library of the works done, environmental offices, and it just can go on and on to local college libraries, local historical societies, at some point someone will have something close to what you want, some answer right away, some take a while, some charge for the information, some don't, if you can go in person, then the amount of material accessible is far greater, but most of the places are digitizing their material slowly

once the material gets sorted, I try to resolve some issues that might not be very clear, if you get aerial pictures, very easily can get an idea were a magazine map is wrong and corrected, most of the places up to the 50s and even 60s, didn't have lots of changes, they might have constructed a highway, train tracks or something to link up, but nothing too crazy, most of the money was used on the main cities and road improvements wasn't a priority, lot of the races were not in the center but just outside of a city, so those areas very seldom change that much, unless they are so close to a big city that it gets taken over

google and newer tools are nice, but very few times they allow you to go back  far that much, but they are good for early placement or location of areas not very familiar, most likely in the last 20 or 30 years the area has changed beyond recognition and have so many more extra roads and crossings that it is difficult to imagine what was there

I have about 500 track folders with all sort of information going, there are maybe 20 or 30 almost ready to get finish and some 20 more in the process to get done, just in the basics right now

one has to remember that back in the days, they used what was available to them or what was easier, so a lot of street circuits were normal,after the war lots of airfields became available, germany was trying to rebuild itself after the war, so a lot of tracks were around autobahn intersections and most likely away from a city in the middle of nowhere, because probably those sections were not targets, lots of tracks in places like Switzerland just got forgotten because they weren't used too often or after 55 just were not allowed use  anymore

Oscar, thank you for your very detailed and informative description of your research process.  You are certainly a treasure trove of background facts that spans our entire era of racing interests!!

As usual, Gliebzeit told it better than me

Thanks a lot for your detailed answer and for the remarkable work you do. I hope that one time you will make a book with these research, I suppose nobody has done this and in addition with so much serious before... You !

About Geneva, I remember that there was some races here, but I always thought that they were running in the city. At this time, the international airport was not still build, and so I understand better how a race track could exist with so long straights !
Switzerland is not particularly reputed for his long road without a curb...

You made me discover so much tracks that, like others here, I dream to see one day alive in GPL...

Thanks for your amazing passion Oscar !

About Geneva, I remember that there was some races here, but I always thought that they were running in the city. At this time, the international airport was not still build, and so I understand better how a race track could exist with so long straights !
Switzerland is not particularly reputed for his long road without a curb...

the aerodrome was there in 1930 but as I said it was a very small area and basically was between the straights and closer to the starting straight,( at least it was marked as such) then at the top part or back straight there was an area occupied by a state radio station or something alike, which I guess had some open ground around it on what it is now the airport ground, the main buildings of the newer airport seem to have been build around that state radio area, don't know when it was build, but by 1954 it was there and looked very new with runways not looking with a lot of use, I think the area was called Cointrin back in the days that the airfield was first marked down, the bigger airport I think was sort of agreed around the late 30s or early 40s but don't know if it got build then or not as the war probably would have slowed down anything 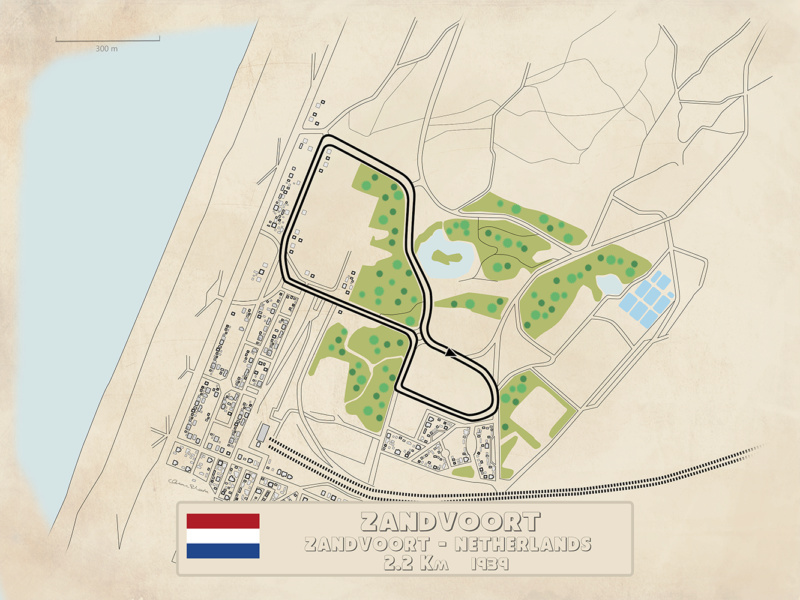 
2 user(s) are reading this topic